Best wishes for the holidays and for health and happiness throughout the coming year. We hope this year you found our products convenient and comfortable and assure that you will like them even more the next one – before the New Year’s Eve we will yet gladden you by news and announcements.Among AnyChart’s clients there are market leaders and startups without websites, our OEM or SAAS partners and enterprise solution developers; some are now taking ocean-facing baths and some are being filled up with snow. They have different views and ideals, but all of us are united by the love for beauty and aesthetics even in such a serious field as business, financial and statistical graphics. Happy Charting Everybody! 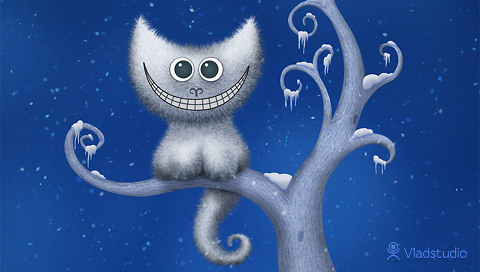 P.S.: Cheshire kitten by one of our favorite artists Vlad Gerasimov: http://www.vladstudio.com

Last March, Adobe and Google jointly announced that Flash Player would soon come built in to the latter’s Chrome browser, eliminating the need for users to download, install and update it separately.

On Thursday evening, Google released Chrome 5.0.375.86 to the Stable channel on Linux, Mac, and Windows, with a fix for a number of security issues. More importantly, the integrated Flash Player has now been enabled by default.

As Stephen Shankland over at CNET points out, built-in Flash was previously only available in the developer and beta releases of the speedy WebKit-based browser, and the release to the Stable channel means the integrated plug-in is now available in its mainstream version.

The update comes a mere two days after Google re-enabled the integrated Flash Player plug-in by default in the Beta channel after disabling it for some time.

Not only is Google giving Adobe’s Flash technology another vote of confidence (Flash Player 10.1 for Mobile, which was announced earlier this week, will be rolled out on Android 2.2 phones first), but the integration also means any updates to Flash Player will be delivered directly via Google Chrome’s updating system, ultimately minimizing security risks that tend to surface when one uses outdated software and components.

To provide AnyChart Users with even more information about our software products AnyChart launches the Knowledge Base. We will do our best to put there most relevant troubleshooting information, articles, white papers, user manuals, or answers to frequently asked questions.  Please use the following URL to access the knowledge base: https://www.anychart.com/kb/ Feel free to suggest your questions to add to our KB and thank you for using our products!

If you are trying to load file using relative URL, that contains colon (“:”) and dot(“.”) in param values, you receive security error:

are not valid URL’s for Flash Player because flash player doesn’t escape “:” in urls.

You should use absolute URL’s for it:

Today we open our blog. Here we’ll discuss our products, publish some developer insights, humor and ideas about new features for our AnyChart solutions. We’ll be happy to hear from you – our customers and friends. We’re open to any ideas – only together we’ll create right solutions. We work for your business. Thank you for using our products!