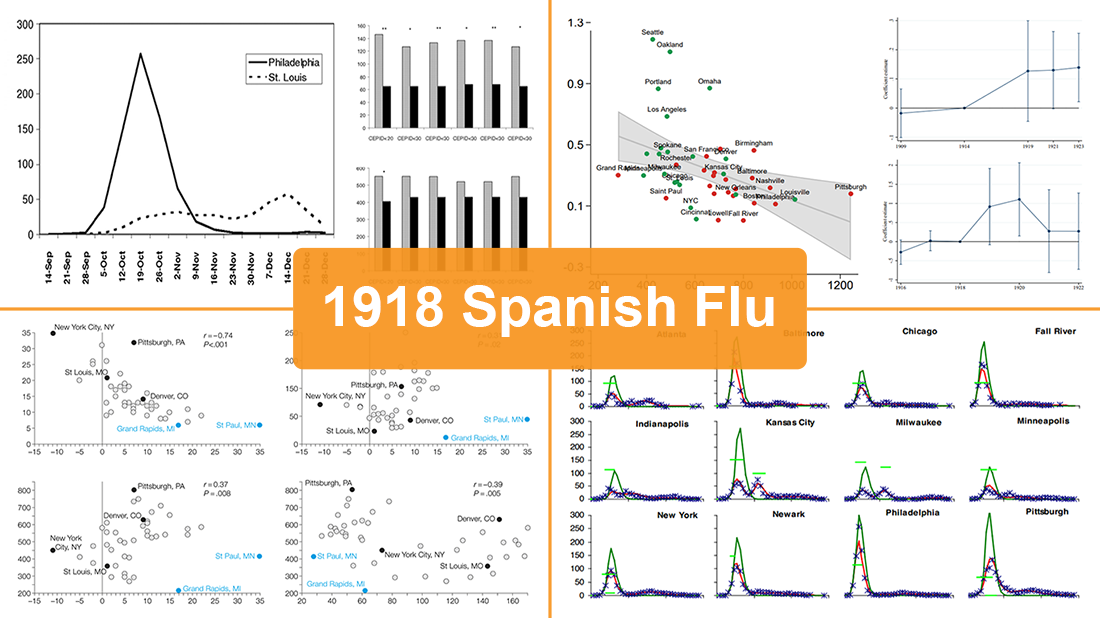 While the world keeps fighting the coronavirus disease outbreak, we have seen a number of attempts to draw analogies between the COVID-19 and previous influenza pandemics. Inspired by a recent National Geographic article by Nina Strochlic with graphics from Riley D. Champine, today we invite you to find out (or remember) what the 1918 Spanish flu pandemic looked like and what lessons it may offer to cope with the current crisis.

For this new DataViz Weekly, we have curated four researches on the 1918 flu pandemic in the United States. Focusing on an analysis of nonpharmaceutical interventions (NPIs) such as social distancing measures and their role, these studies contain a lot of diverse data and charts. They are worth checking out if you’re interested in the subject of epidemics or in data science, analytics, and visualizations as such. 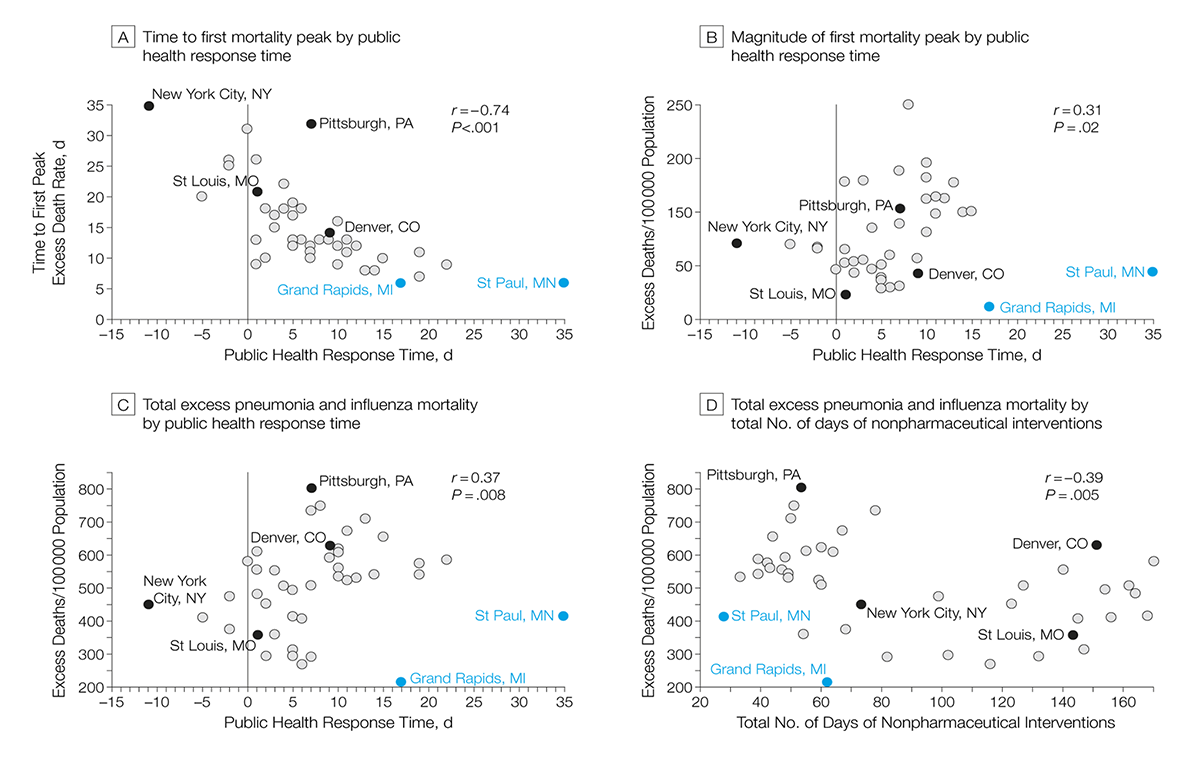 The article “Nonpharmaceutical Interventions Implemented by US Cities During the 1918-1919 Influenza Pandemic” published in 2007 in JAMA (The Journal of the American Medical Association) is exactly where National Geographic’s staff writer Nina Strochlic and graphics editor Riley D. Champine took data for “How some cities ‘flattened the curve’ during the 1918 flu pandemic” referenced in the introduction.

It summarizes a study made by a team of researchers consisting of Howard Markel, J. Alexander Navarro, Alexandra Sloan, Joseph R. Michalsen, and Alexandra Minna Stern — all from the Center for the History of Medicine at the University of Michigan Medical School, Ann Arbor; and Harvey B. Lipman and Martin S. Cetron — both from the Centers for Disease Control and Prevention (CDC).

The authors found a strong correlation between “early, sustained, and layered” application of NPIs and mitigating the consequences of the Spanish flu pandemic. According to the paper, the appropriate implementation of NPIs could be a significant contribution to reducing the number of deaths as well as (and by means of) decreasing the burden on health care services and critical infrastructure and providing valuable time for production — and distribution — of antiviral medication and vaccine.

“In planning for future severe influenza pandemics, nonpharmaceutical interventions should be considered for inclusion as companion measures to developing effective vaccines and medications for prophylaxis and treatment,” the authors wrote. 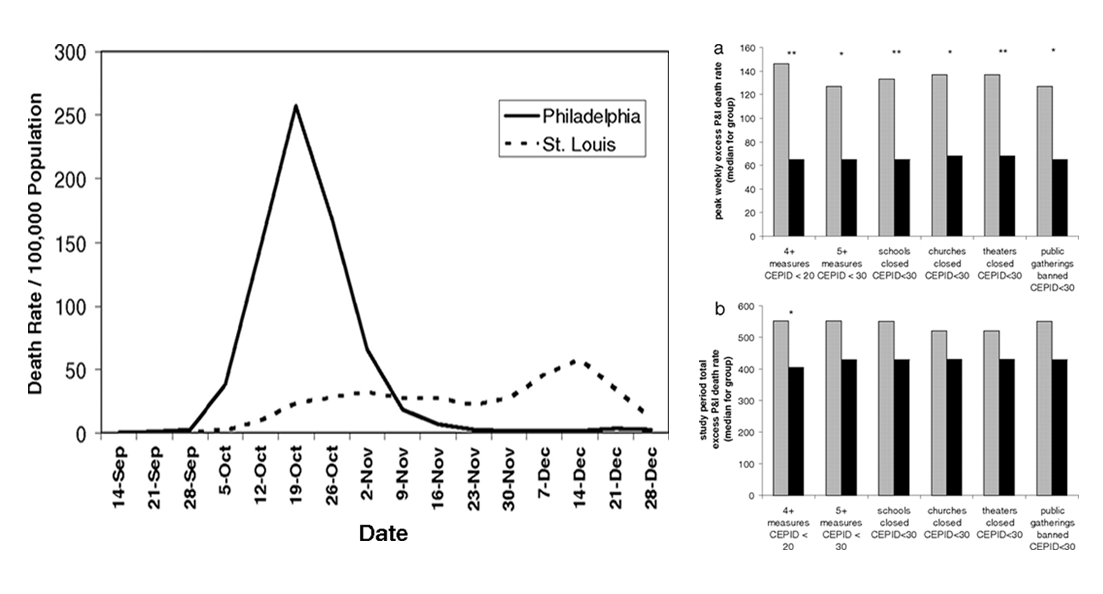 The article “Public health interventions and epidemic intensity during the 1918 influenza pandemic” published in 2007 in PNAS (Proceedings of the National Academy of Sciences of the United States of America) shares the findings of another team of experts. They are Richard J. Hatchett (Division of Allergy, Immunology, and Transplantation, National Institute of Allergy and Infectious Diseases, National Institutes of Health), Carter E. Mecher (Department of Veterans Affairs, VA Southeast Network; and Homeland Security Council, Executive Office of the President, EEOB), and Marc Lipsitch (Department of Epidemiology and Department of Immunology and Infectious Diseases, Harvard School of Public Health).

They, too, observed evidence of the role of interventions in reducing influenza transmission in 1918. In addition, the authors revealed that the benefits of NPIs had been limited to the time they’d remained in effect, stressing the need for prompt action by public health authorities.

“In practice, and until emergency vaccine production capacity increases, this means that in the event of a severe pandemic, cities will likely need to maintain NPIs for longer than the 2–8 weeks that was the norm in 1918,” they noted.

The Effect of Public Health Measures on the 1918 Influenza Pandemic in U.S. Cities (PNAS) 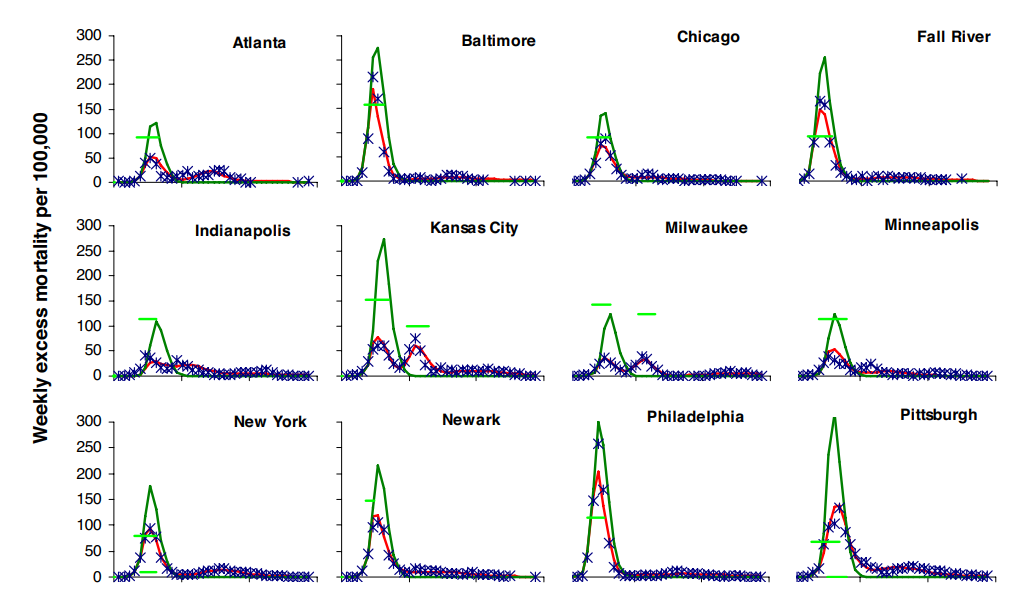 They put it as the most important conclusion that the timing of interventions had had a profound influence. For example, it was identified that those American cities which had introduced measures early in their epidemics had achieved moderate but indeed significant reductions in mortality. And the authors managed not only to show this correlation statistically, but also to demonstrate a plausible quantitative model explaining how such correlations had arisen.

According to the authors’ conclusions, “although attack rates (and thus mortality) can be reduced by 30–40% through transitory controls, to achieve reductions beyond this with public health measures alone requires those measures be sustained for as long as it takes for vaccination of the population to be completed, perhaps as long as 6 months. The experience of many U.S. cities in 1918 shows us that the social, political, and behavioral challenges in delivering such long-term intensive policies will be considerable.”

Pandemics Depress the Economy, Public Health Interventions Do Not: Evidence from the 1918 Flu (SSRN) 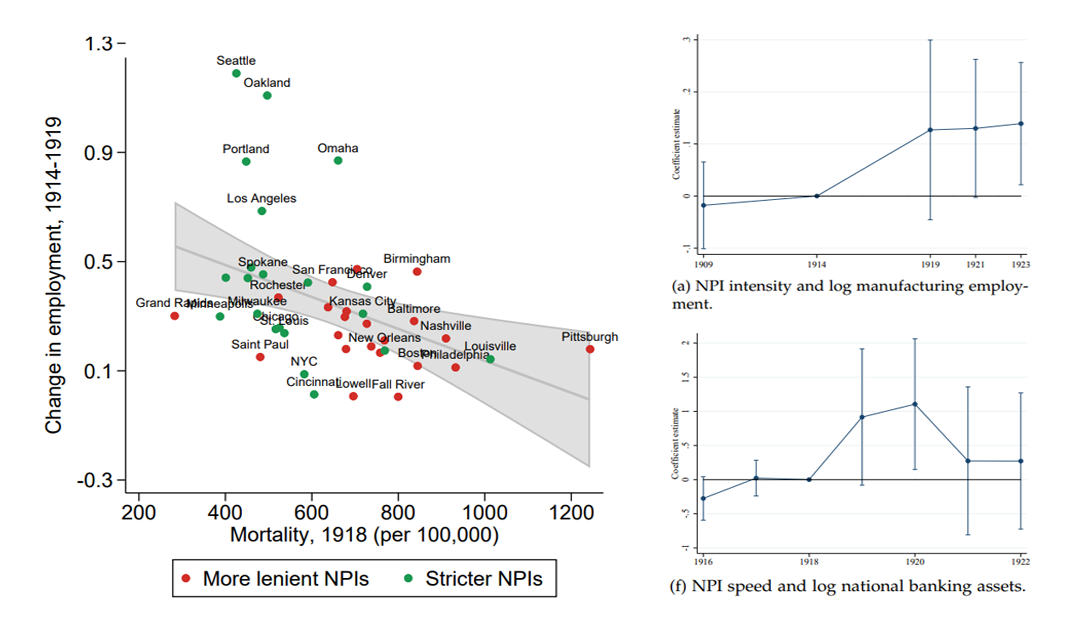 The article “Pandemics Depress the Economy, Public Health Interventions Do Not: Evidence from the 1918 Flu” has been published just recently, this year, in the SSRN (Social Science Research Network) as a preprint research paper said to welcome comments and last edited on April 10, 2020.

The analysis reported in this article was made by Sergio Correia (Federal Reserve Board), Stephan Luck (Federal Reserve Bank of New York), and Emil Verner (MIT Sloan School of Management). What they examined was the impact of the 1918 flu pandemic and NPIs on economic activity in the United States.

According to their conclusions, American cities implementing more forceful and rapid NPIs during the Spanish flu outbreak had not experienced worse downturns. Moreover, evidence on manufacturing activity and bank assets suggests that, in the end, the economy had performed better in areas with more aggressive NPIs after that pandemic.

“We find that cities that intervened earlier and more aggressively do not perform worse and, if anything, grow faster after the pandemic is over. Our findings thus indicate that NPIs not only lower mortality; they may also mitigate the adverse economic consequences of a pandemic,” revealed the authors.

Of course, every situation is unique. But there are times when at least some lessons may be useful… Check out these researches to learn (much) more about the lessons from the 1918 Spanish flu pandemic.

We wish you all good health.