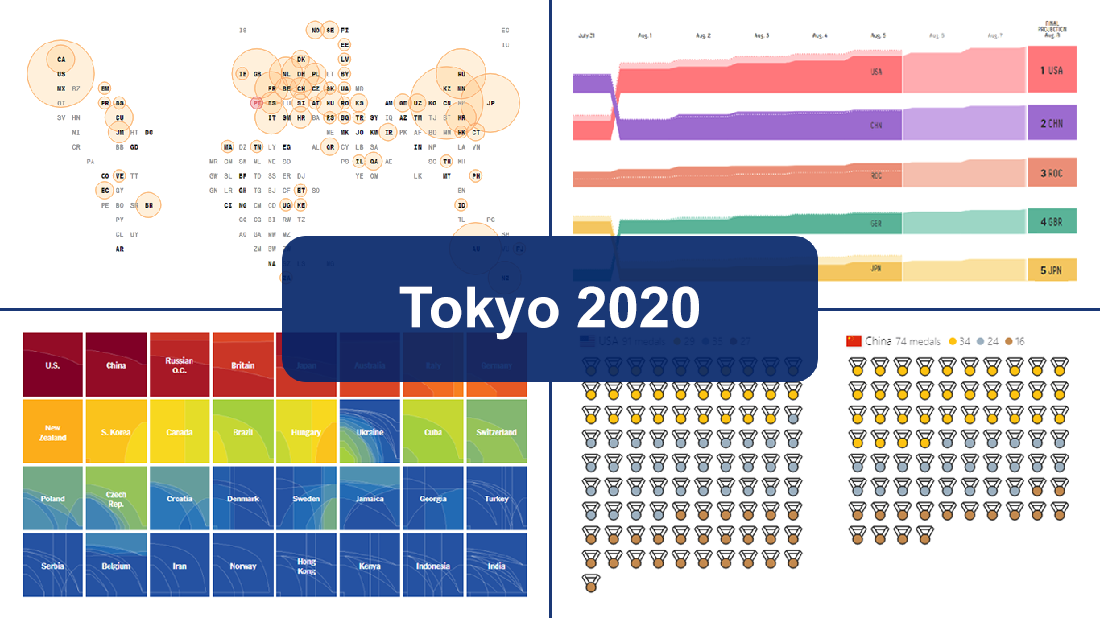 Delayed one year due to the COVID-19 pandemic, the 2020 Summer Olympics officially known as the Games of the XXXII Olympiad and commonly referred to simply as Tokyo 2020 have been underway for two weeks and are already coming to a close, with under 50 medal sets yet to be distributed over the remaining two days.

In this special edition of DataViz Weekly, we are happy to showcase four wonderful Olympic medal trackers providing an insightful view of medal counts and country standings with the help of telling visualizations — from Bloomberg News, The New York Times’s The Upshot, FiveThirtyEight, and Axios. 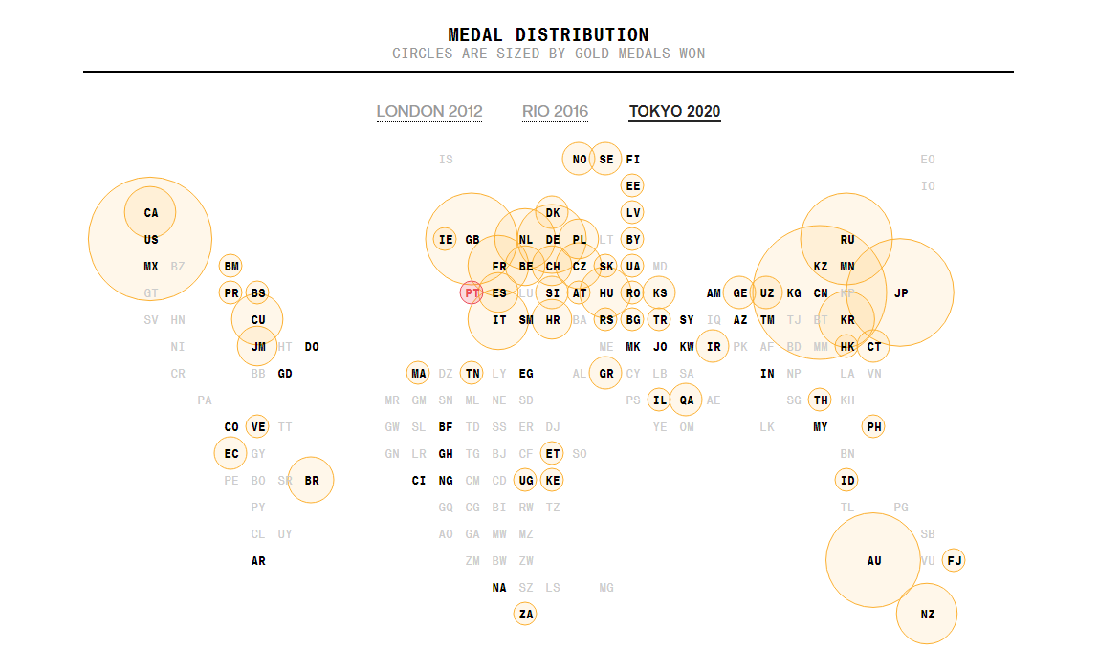 Let’s begin with Bloomberg‘s Tokyo 2020 medal tracker. It is an impressive project with a lot of (beautiful) everything. In addition to a standard, table-based representation of the medal count by country along with the information on the latest results and the calendar of Olympic events, there you can find a number of compelling visualizations and take a deep dive into the historical context.

In particular, streamgraphs are there to represent historical medals won, for each sport. An international map grid is used to visualize the medal distribution at Tokyo 2020, Rio 2016, and London 2012. A line-based isotype, force-directed clusters, and a whole lot of bubbles also do a great job communicating various interesting information about the current and previous Summer Olympic Games in a stunning way and making the medal tracker on Bloomberg News really fun to explore.

The Upshot by NYT: “Tokyo Olympics: Who Leads the Medal Count?” 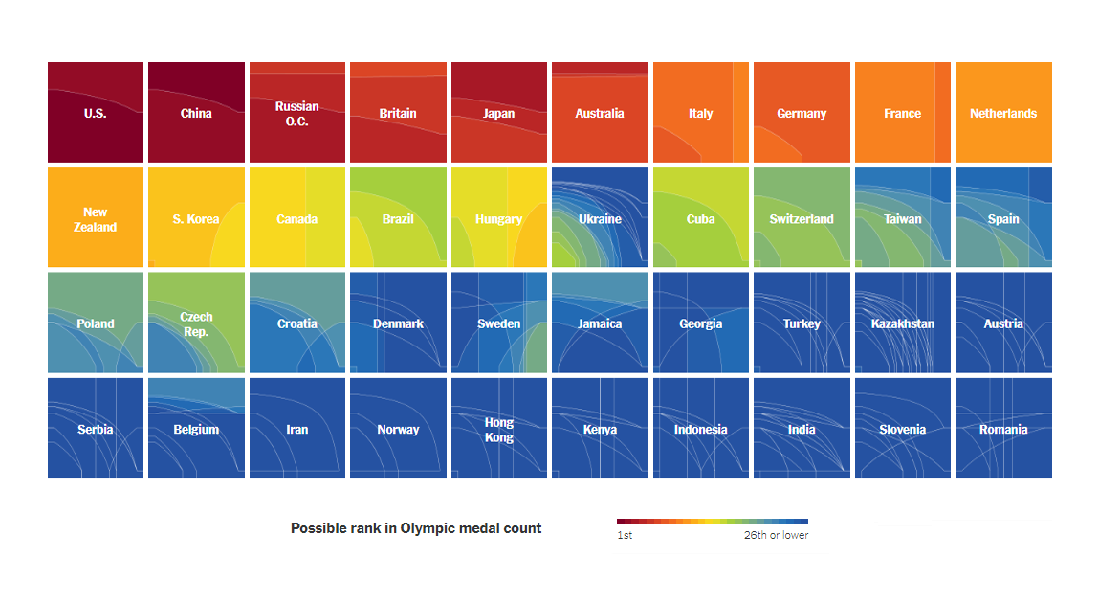 If you are wondering what nation is doing best at the Tokyo Olympics, first you should determine the ranking model as the answer depends on it completely. For instance, as of the time of writing, China holds a lead if you prefer to count gold medals alone. But if you sort countries based on the total number of medals won, it appears that the United States is at the top.

The New York Times’s The Upshot allows you to check all possible medal counting functions and see what country is leading in Tokyo according to what you believe is the ultimate measure of success in the Olympic Games.

The interactive charts here display each country’s current rank at the Olympics depending on the relative worth of one gold medal to one silver medal and one silver medal to one bronze medal. For example, if you only care about the number of gold medals, check the top right corner. If you believe all medals matter and have the same value in such rankings, the bottom left corner is all yours. Other weights are represented in between.

FiveThirtyEight: “Which Countries Are Doing Better — Or Worse — Than Expected At The Tokyo Olympics?” 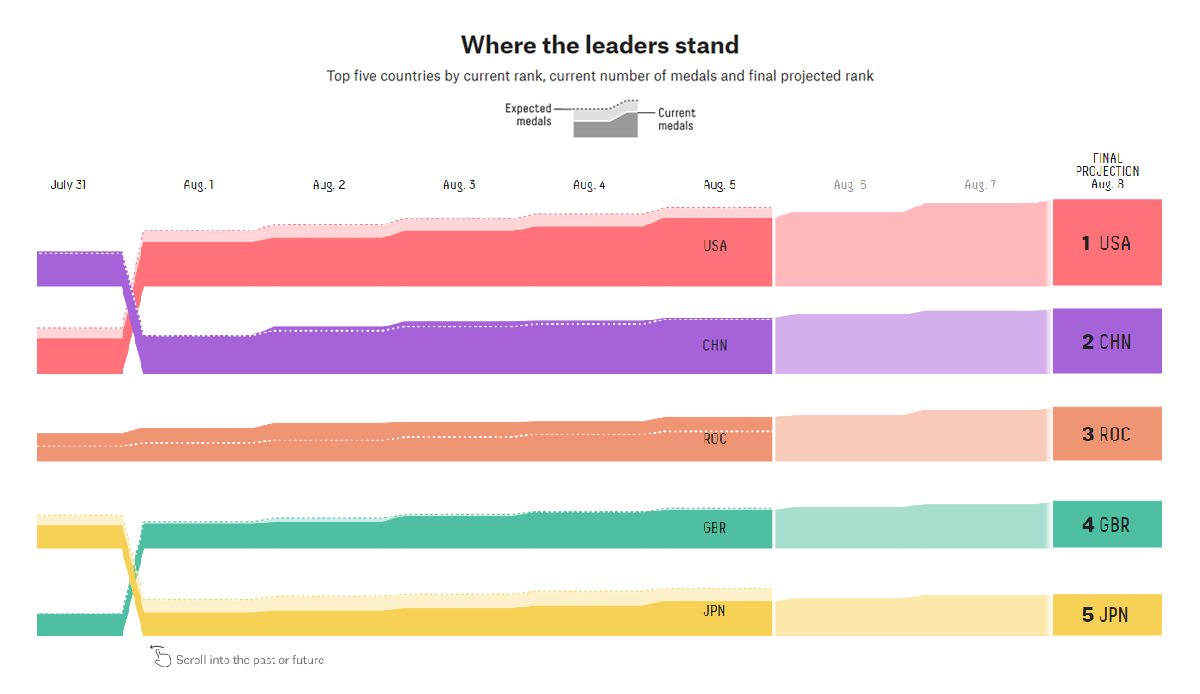 FiveThirtyEight‘s interactive medal count project offers a look at the number of medals won by the national teams in the context of the initial analytic expectations. The projections used as the point of reference were generated based on the competing countries’ achievements in each sport over the past three Summer Olympics. (Learn more about the methodology here if you would like.)

So, in this project, you can compare the current Olympic award count for each nation with how many medals FiveThirtyEight thought it would have already won and see how much more it might get during the remaining time. Check out the streamgraph visualization for the top five countries. Scroll down a little bit to check out how each of the competing nations stacks up by current rank and current medals, medals won vs expected, and projected final rank. 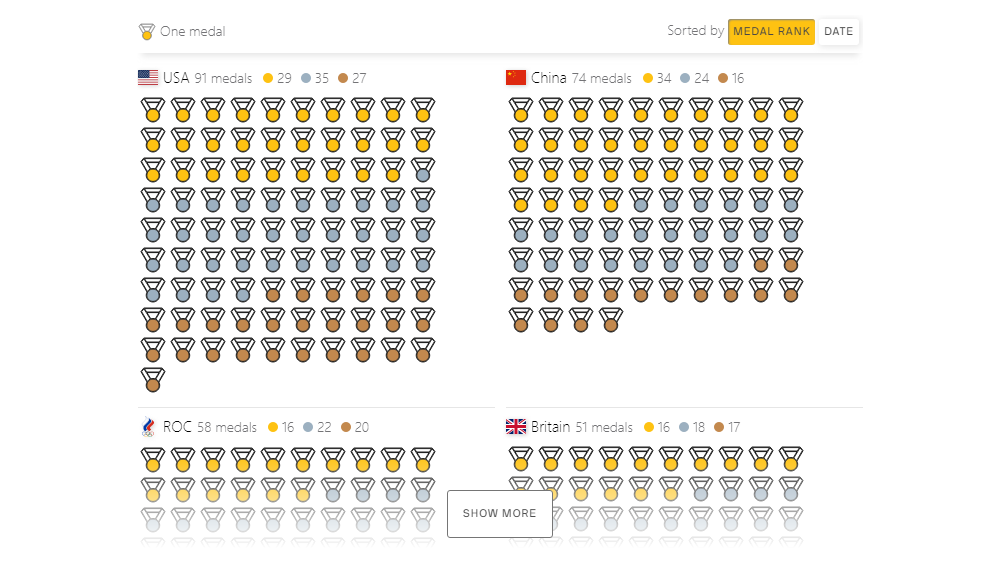 The Olympic medal tracker launched by Axios looks pretty simple yet elegant. Depicting every medal won by a country as one medal of the respective color (gold, silver, or bronze), it provides an informative overview of how many medals each of the competing nations have already deserved to take home from Tokyo 2020.

Hover over a medal in a country’s collection and you will see the details of who, when, and in what sport and discipline have won it. The medals can be sorted by rank or by date.

Use these cool medal count projects to keep track of the Tokyo Olympics results. But whoever competes and wins, let’s remember the unifying power of sport and the great importance of solidarity. The recently updated Olympic motto reads “Citius, Altius, Fortius — Communiter” in Latin, which means “Faster, Higher, Stronger — Together” in English. Let’s unite and stand together, and we will be able to successfully cope with any global challenge.

Stay tuned for Data Visualization Weekly, maybe the best place on the web to discover the most interesting new charts, maps, and other information graphics curated from all over the internet — delivered every Friday on AnyChart Blog! 🖖