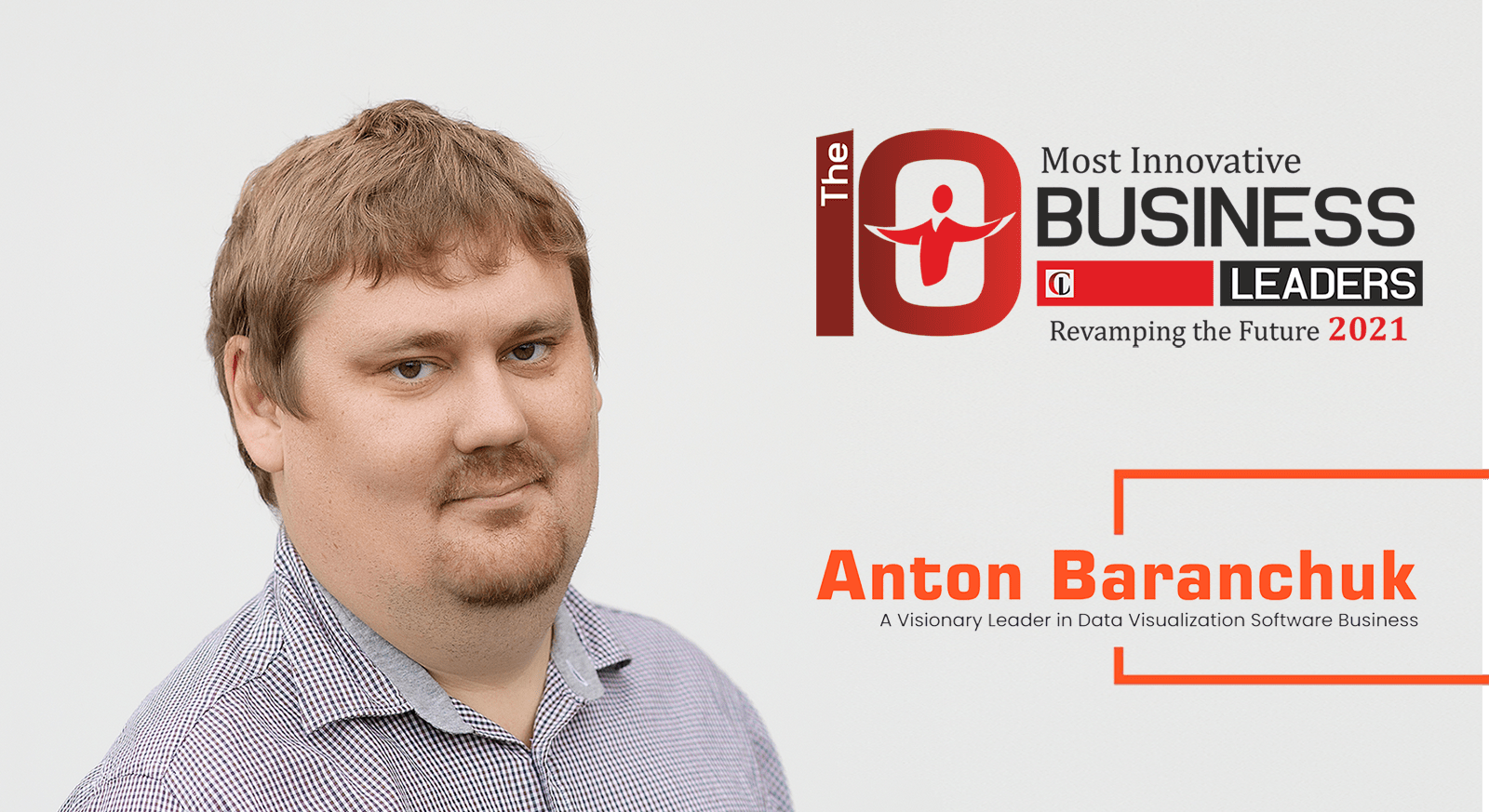 Anton Baranchuk, our CEO, has been recognized by CIOLook Magazine as one of the 10 Most Innovative Business Leaders Revamping the Future! Great news and congratulations to the boss!

Right now, we are excited to share with you the story of his success with AnyChart, the company he co-founded when pursuing a Ph.D. back in 2003 that turned from a small startup to a global data visualization software market leader. This article is published in the dedicated special edition of CIOLook and we are thankful for the opportunity to repost it on our blog.

What distinguishes visionary entrepreneurs is that in the end, their aspirations become a reality. Eighteen years ago, while pursuing a Ph.D. in Mathematics, Anton Baranchuk came up with the idea of a universal solution for data visualization. To develop it, he founded a startup called AnyChart which was profitable from the very start. Nowadays, the company leads the global market, counting AT&T, Citi, Samsung, Volkswagen, Yahoo, and thousands of other businesses worldwide among its customers.

It all began with thoughts of making interactive data visualization easily accessible through a sort of one-size-fits-all technology to let developers represent any data in any chart. Why is that important?

Technically, it may seem not too difficult to create graphs and diagrams as there are various dedicated tools here and there. In fact, that is only so when you need to represent some certain data in a certain chart type within a certain environment. But what if a situation is not that simple and favorable?

For instance, when it comes to enterprise reporting systems everything is much less straightforward. There, you often have to deal with different sources and types of data, as well as a huge variety of questions the analysts are looking for answers to. At the same time, it is critical to always provide a clear, explicit picture in which data truly speaks revealing obscure trends and patterns.

Making a “Swiss knife” for data visualization development was the thrilling challenge AnyChart rose to address.

A Novel Approach Turned into Inception

The year 2003 when AnyChart emerged was the time of Adobe Flash — it was everywhere. Aiming to create a universal charting solution, Anton and his teammates realized that it was possible to extract data in the XML format from literally any source and display it in the form of a Flash chart.

This approach was fulfilled into a dedicated component that very soon earned first users, from a bunch of small websites to giants like Oracle, then 3M, Lockheed Martin, and many others.

After the downfall of Flash as a universally used environment several years ago, AnyChart added the SVG support and then completely shifted to HTML5, the backbone technology of the modern web.

In a challenging transition from Flash to HTML5 in the early 2010s, AnyChart built a JavaScript charting library as the next versatile, universal data visualization tool allowing developers to build charts seamlessly in their stacks, with any kind of technologies and databases.

Fundamentally, it is a single JS library for creating any charts, out of any data in terms of source and format, which are easily embeddable in any web, mobile, or standalone project. To give each customer exactly what they need, the company markets it as a family of smaller, purpose-specific charting products:

In 2018, AnyChart’s data visualization library was named the Best Innovation in JavaScript Technology and received a prestigious DEVIES award at the world’s largest developer tech awards event at DeveloperWeek in California.

In 2019, AnyChart partnered with Qlik, a globally leading platform for data analytics and business intelligence. The alliance allowed AnyChart to engage with an entirely new category of customers in addition to web developers and software engineers — end-user audience of data analysts and BI experts worldwide.

In 2021, AnyChart is a recognized leader in interactive data visualization whose solutions are used by thousands of companies all over the world. From early-stage startups to established leaders such as AT&T, Bank of China, Bosch, BP, Citi, ExxonMobil, Ford, General Electric, JPMorgan, Lockheed Martin, Merck, Microsoft, Novartis, Reuters, Rolex, Samsung, Tencent, UBS, Volkswagen, Yahoo, and many more.

In America where the company’s global HQ is located, over three-fourth of the Fortune 1000 companies have already chosen AnyChart to operate data visualization in their apps and products, in this way getting better insight into their business and improving data-driven decision making to boost the overall performance.

There are also a number of governmental and educational organizations among AnyChart’s customers, including California State University, Greater Manchester Police, International Business School Groningen, Oxford e-Research Centre, China’s Ministry of Land and Resources, Universidade do Minho, University of Chicago, Utah Department of Transportation, Women’s Health America, WVU School of Medicine, and many others.

When we asked Anton Baranchuk about the essential traits that successful leaders should possess, he emphasized openness in the widest sense — to teammates, to customers, to new information, ideas, and experiences. Then, he said, it is always necessary to analyze what they have found out and think about how that could be applied in what they are doing, and not just for now but also — and maybe most importantly — for later stages.

In addition, Anton stressed that in order to withstand the complexities one should analyze the overall market and think as many steps ahead as possible. He also believes that a team of enthusiastic professionals is what matters the most on the path to growing a thriving business.

Originally published in the “The 10 Most Innovative Business Leaders Revamping the Future 2021” edition of CIOLook Magazine issued in March 2021, under the title “Anton Baranchuk: A Visionary Leader in Data Visualization Software Business.”