“I am a sole proprietor that has been developing data driven applications for manufacturing processes for several years now.  My clients require on-demand analysis of the data that they are capturing and intuitive interfaces.

The projects I have been tackling most recently have required a fair amount of data analysis and summaries.  I wanted to display this on-demand data using a combination of charts and tables to make it easy for my clients to drill down into the data that they required.  I have used a couple other charting libraries in the past, but they never really filled the need.  In some cases I was stuck with what I was provided so never looked much further.

For the latest project I was able to chose the best tool for the job and after a bit of testing and experimenting I settled on AnyChart.  Initially I had stayed away because of what I had initially seen as a “high” cost of licensing.  As  I began to play with some Open Source tools I quickly began to realize that the man hours saved by using AnyChart easily compensate for the cost.  Instead of trying to report/fix bugs in the libraries I am able to develop my applications and worry about fixing the “features” that happen to slip by my testing efforts.

As with any new tool, there was a learning curve, but was pretty minor.  I already had a background with XML so generating the chart data was a breeze.  Most of my troubles came in navigating the documentation to figure out how to handle a few things.  What I really like about the Flash charts is that the rendering gets done on the client side, which saves some cycles on the server and allows for an interactive experience for the users.

In the end, I will definitely use and recommend the use of AnyChart for data projects that require a more attractive and interactive interface.” 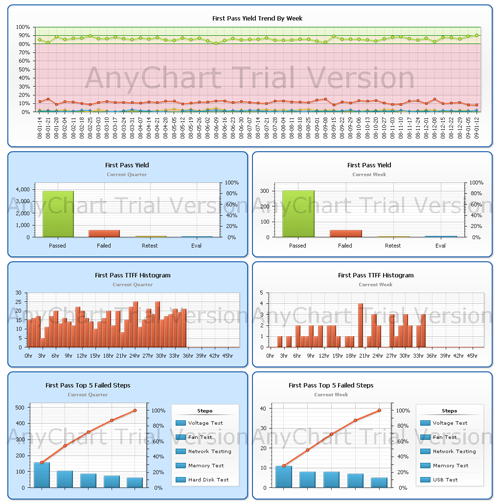